Single Day = Jackpot for Alibaba, leader in e-commerce in China

Single Day = Jackpot for Alibaba, leader in e-commerce in China !

Single Day = Jackpot for Alibaba, leader in e-commerce in China

8:00, November 11 (Beijing Time): Alibaba announced that it has recorded $ 2 billion in gross merchandise value in the first hour, the equivalent of what it has done in almost nine hours last year. See the table at the bottom of this post for a detailed comparison.
Forget Black Friday and Cyber Monday - Simple day China is now the largest center frenzy online world.
From midnight (Beijing time) on November 11, China hosts the e-commerce holiday of the year - 24 hours on single day sale. Last year, Alibaba Group Jack Ma scored $ 5.8 billion in the single November 11, setting a record for the e-commerce giant since the early holiday sales five years ago. Which exceeded $ 3.7 billion in combined sales line Thanksgiving, Black Friday and Cyber Monday from desktop computers in the US, according to comScore.
Alibaba to JD.com in giant online e-commerce in China looking to hit another record that could exceed $ 8 billion this year. Tmall.com, one of the main sites of Alibaba, invented the 24-hour sale five years ago to enjoy the popular single Day, when young people in mainland China either celebrate or lament "unique." The party takes its name from the four "1" on the date of November 11, which resemble four bare sticks. in Chinese, naked or guanggun refers to guys who are single stick. to target this population of young urban consumers Tmall.com sales started with 27 vendors and has grown to include some 27,000 marks in just five years. 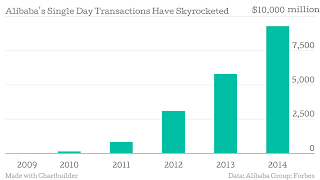 How can small companies in Fashion start their Business in China? http://t.co/ILM2FhHI0O via Marketing China
— Marketing China (@marketing2china) 12 Novembre 2014

For Alibaba, a key component of this year is the ability to connect with Chinese consumers brands and overseas retailers. More than 200 dealers from over 20 countries will compete for a share of the record spending by Chinese consumers, the company said. Chinese buyers can now purchase deals overseas so clean not only Alibaba e-commerce sites, such as Taobao and Tmall; they can also shop at major retail sites abroad and pay with Alipay, thanks to the newly launched EPass program.
Singles Day sale this year also includes the most fierce competition between large companies and retailers of electronic commerce in China, such as JD.com, Jumei and Vipshop. To consolidate its leadership and closing of competitors, Alibaba threatened legal action last month and forced to withdraw from media advertising to other businesses using the unique expression "double." Back in 2013, Alibaba cleverly copyrights the phrase "Double 11" (Shuang yi shi in Chinese). Here's how the single Alibaba Day Sale stacked against its competitors and other days online sales: Alibaba GMV (gross merchandise value), which jumped from $ 8 million to a record $ 5.8 billion in the past five years has reached a new record of $ 9.3 billion in 2014