Alibaba : record $17.73 billion worth of sales on Singles’ Day but saw growth slow

Singles 'Day, the world' s largest online shopping store organized by Alibaba, has changed the way some agencies do business in China, particularly in the management and promotion of brands in online shops, Adjustment to competitors. Alibaba Group Holding Ltd.'s Singles Day festival posted a record 120.7 billion yuan (17.73 billion US dollars) in sales on Friday, although the gala day saw a slow Chinese buyers looking for deeper discounts and lower prices. In the midst of fanfare and celebrity razzmatazz, sales on Alibaba's platforms had run to a billion dollars in less than five minutes and broke last year's total with almost nine hours of the gala Shopping for a day to spare.
source

The final total marked a 32 percent increase from 2015, but growth was significantly lower than the 60 percent increase last year, a reflection of more caution among buyers who chose to spend less For each purchase than in previous years. The 24-hour event, held annually on November 11, provides a benchmark for Alibaba's performance and a glimpse of the Chinese swing to online shopping, especially via smartphones. 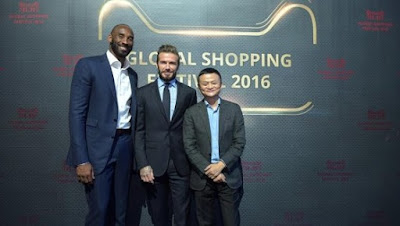 Singles Day is not just a number

Alibaba President Jack Ma downplayed the importance of the final figure in a speech shortly before midnight, echoing other leaders who spoke during the day. "Singles Day is not just a number," said Ma, adding that the gross market value (GVM) metric was "misleading" because it underestimated the company's broader ecosystem . GMV refers to the value of goods sold by sellers via Alibaba's platforms. Alibaba earns money through advertising and billing sellers a part of their sales.

"When volumes started to grow a little slower, I became more relaxed," Ma said, citing the challenge of handling such a number of orders. "We do not want to collapse the entire logistics system." The discount shopping day, also known as "Double 11", moves even more merchandise than Black Friday and Cyber ​​Monday sales days in the United States combined. The slowdown in sales growth occurs in the midst of a more saturated online retail market, a weaker economy and low personal income growth hitting consumer portfolios. A strong US dollar also reached dollar wholesale sales.
more information
Publié par MIKE à 23:21 2 commentaires:

For a company that specializes in digital marketing and advertising, the growth of GMA has been stable over the past four years and the agency now employs 37 full-time employees, extending the office space in the office Jing annum capacity. Rather than move the entire office, and Philip Olivier founder Qian took the strategic decision to open a new office in Zhabei, leaving sales and client management teams in the Shanghai headquarters to accommodate the team growing digital operations.

We work hard, but here we feel inspired to develop new ideas. " As the agency continues to grow, GMA looking to expand their network further with the founders in search of opportunities for offices in Beijing and Shenzhen. Gentlemen Marketing Agency is a digital marketing company based in Shanghai that helps foreign companies to develop their business in China through communication with Chinese consumers.

It is easier for our foreign customers and our international staff who like to be based in the city. "Our operational team is mostly local and prefers to work in areas where the cost of living is cheaper," says Olivier. The choice of office space Hutaizhi way was also a consideration decision for the future.

Startup center was designed with entrepreneurs and start-ups in mind. It has modern facilities with open bright spaces, offering more than the traditional four areas of wall office. GMA seeks to recruit the next generation of digital marketing "We want to attract the best, brightest and most innovative desktop environments like that are attractive to young and innovative minds," says Olivier. For the new recruiter, Chiu chuanfeng (Fred) the office is a great outlet for creativity. According to Fred, "the team is young and dynamic, casual work environment suits us.