The CNNIC published its figures for Chinese e-commerce in 2012 and there is only one way to describe them crazy. Overall, the CNNIC said the Chinese E-commerce market has seen more than 1.2 trillion RMB ($ 190 billion) in transactions during the year. This is such a huge number that I will write all the way so that you can really feel how it is massive: 1,259,400,000,000 RMB.

Perhaps even more important, however, is that CNNIC said 242 million Chinese users bought things on the web last year. That's a lot, but in a country with over 1.3 billion people, it also belies just how much space there is for the Chinese e-commerce market to grow over the long term - especially if the Chinese economy continues to grow with it.

The most common online shopping - by far - were clothing (including shoes and hats), with 81.8 percent of e-commerce users who have purchased at least one article of clothing in line every six months. Next was daily necessities, that 31.6 percent of users bought. Third in line was computers and other digital electronic devices, bought 29.6 percent of users.

40.7 per cent of e-commerce users in China used a mobile device to navigate e-commerce sites at least once in the past half year, and these users, 53.6 percent used a printer connected to the platform mobile e-commerce application, they grazed (instead of the phone's web browser). Not surprisingly, this is a significant increase over last year. And if the numbers Alibaba are any indication, next year is likely to be even greater. 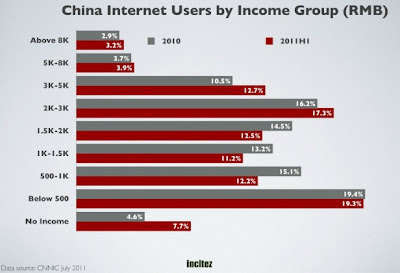