Ecommerce is growing in China really?

Ecommerce is growing in China really?


Ecommerce is growing in all countries and China with 500 million users is no exception to the rule. After talking about the E-commerce in Canada and E-commerce in India so here's an infographic on the Chinese e-commerce. 500 million Chinese Internet users spend 750 billion renminbi, or around 95 billion euros of 200 000 sites E-commerce (2 times more than European countries !). Given the structure of the country, the infrastructure and the difference in living standards between urban and rural areas it is normal that the majority of E-commerce takes place in urban areas. 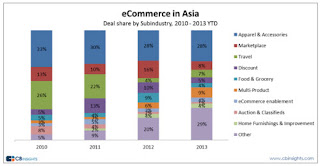 The situation will likely evolve in the future in favor of the less urbanized areas. In terms of E-commerce sites Taobao alone would have more than 370 million customers, for comparison is ten times more than Zappos (shoes leading site in the U.S.). If you are interested in the Chinese market you will find a pdf file created by HEC on Chinese ecommerce

view 10Tips to do good job with Ecommerce in China
Publié par Marketing to China à 21:23