The peculiarity of the Chinese Internet is that you can find everything when you want to buy online. Some sites are even specialized in specific products, such as handbags or ready to wear baby. We will now turn our attention to B2C sites most used by the Chinese and their characteristics ...

China: First country in terms of online shoppers To mention some figures for the year 2012, 220 million e-shopper there were according to marketingtochina.com  43% of Chinese Internet users.

According to the analysis, there will be 424 million of online shoppers in 2016.

With these figures, China is positioned logically in the first place countries number of users who have shopped online.

Between 2011 and 2012, the e-commerce in China has increased by 25.8%, is the fastest growing activity. Social and e-commerce systems are closely linked, in fact, more than half of users Weibo, the most popular platform of microblogging in China, say go to an e-commerce site after getting the information they needed in the Chinese social network. 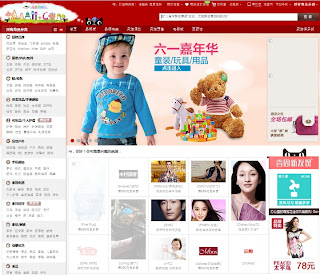 Regarding B2C, the trend is a little different as the graph below the China Internet Watch website that lists the major sites in China in terms of market share shows.

Here below a description of the major players: B2C market share

Established in April 2008, Tmall belongs to Alibaba Group also owns Taobao and Alibaba. Tmall is the 8th most visited site in China according to Alexa ranking. We count 100 million registered users on the site. Payments are made from Alipay (Chinese equivalent of PayPal) for consumers in China, Hong Kong, Macao or Taiwan. Brands can create a personalized space to sell their product for example Nike (nike.tmall.com).

JD.com (16%) 360buy can be considered a pioneer since the site was launched in July 1998. Initially focused on electronics, the website has rapidly diversified to a range of consumer items (shoes, toys, cosmetics etc..). In October 2012, the site launched internationally with an English version, 360buy announcement on its site 400 000 products can be delivered in 35 countries.

The company Tencent, well known in China and in the world to be at the origin of the QQ instant messaging but also the implementation WeChat also wanted to launch its e-commerce platform in October 2011. Like many of its competitors, Tencent offers items such as cosmetics, ready to wear or jewelry. The site from the beginning wanted to partner with other small e-commerce sites such as Haolemai specialized in the shoe or Yixun specializing in electronics.


This is a beautiful performance to stand in 3rd place by being launched in 2011.

Suning has the distinction of being an actor with this physical stores (more than 1300 across China). Suning has decided to launch its website in order to obtain an additional source of income. The website also aims to diversify into online booking for tourism, following the trend of its 360buy competitor.


The giant U.S. e-commerce positions in 5th place in China with 2.3% market share. What is interesting is that Amazon has bought a Chinese actor (Joyo) in 2004 to 75 million dollars to enter the Chinese market. Amazon's strategy is oriented to the U.S. rather than trying to adapt to the Chinese market. The Kindle will also make an appearance in the coming days in China. http://www.amazon.cn/

Dangdang 360buy can be considered as a pioneer in the Chinese e-commerce. The website was launched in 1999. The offices are located in Beijing. Dangdang has specialized in books. The website is also an IPO in November 2010. One of its main competitors is 360buy.

As Suning, Gome is a click-and-mortar. Founded in 1987, is a specialist appliances and electronics to the general public. The company is known in China for having some organizational and financial turmoil on the part of its leaders.

The heart of business Vancl is ready to wear. On its website, the company only sells his own products. It could be compared to Gap or Uniqlo for example. In parallel, the company also launched the Vjia.com site that sells many brands of ready to wear. In 2011, the site wanted to go to the United States, but ultimately it does not happen.


From the rest of the players is very low, we can combine them into one "Other" category. In this category include companies such as 51buy, Coo8 .

After analyzing the data, so it is clear that Tmall dominates this highly competitive market with almost 50% market share. It is therefore very difficult for other sites to stand out and gain market share, having Tmall natural choice in the minds of Chinese.

But all is not lost before, in fact here are 10 tips to succeed effectively in the field of e-commerce on the Chinese Internet.